One of the joys of the pandemic (yes, I said that) has been the on-lime communities and the art making opportunities that sprung up.

In February of 2021, I joined a photo zine class with Shawn Rowe and some buddies from Lillstreet Art Center. I quickly got hooked ол single-sheet zines, both accordion fold and the classic 8-page mini-zine.

I liked the small technical challenge to do the layout in Photoshop and that I could then print them on 11x17 ledger size paper and cardstock at my neighborhood Staples.

One hundred years late, I had entered the world of mechanically reproduced art. [Thank you Walter Benjamin]

Zines seemed like the perfect answer to the nagging questions

What do I do with my photos?

What kind of object do they become?.

From Objects To A Community

With zines in hand, and in the mail, I started showing them, exchanging them, and generally made them my cartes de visite* - a jumping off point for a conversation, a way to show something which spoke to me - or some soap box I wanted to talk from.

[*calling cards or cartes de visite - For several decades, beginning in the 1850s, it was common to have photographs mounted on cards that were 2½ x 4“ to be left as a calling card or otherwise shared with friends and family. They were the beginning of small scale mass production, sometimes personal, sometimes cultural.

Later (1925-1928), Andre Kertesz used postcard stock as his art form during his first years in Paris, sharing them among the artists who were part of his emigre cafe community. Late in his life, Kertesz became enamored with Polaroid SX70 images. I too was a fan of the SX70 and its prints. There is something joyful about passing around photos with friends.]

I started sharing my zines with other zine makers (at Zine Mercado, at Quimby’s, through the Zine Club Chicago, with others in Jasper Goodrich's SIP art classes at the Hyde Park Art Center, and at the Filter Photo Festival and crit group).

I learned from Nat Pyper that there is a queer zine archive, QZAP, in Milwaukee (with great on-line access). There's also the Joan Flasch Artists' Book Collection at SAIC (a great resource when they re-open to the public).

Moving into the Third Dimension 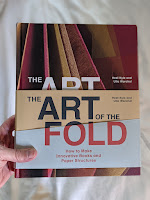 Several people suggested I look at Hedi Kyle and Ulla Warchol's book The Art of the Fold.

The little books they describe are so much more than ordinary booklets. They are handcrafted 3-D objects. OMG.

How does this work?

Where do I start?

I started with a variation on the 8-page mini-zine. It takes a sheet folded the long-way and then works with the short-way folds and cuts across pairs of panels, to create pop-put sections. I love the architectural look.

From that concept, I drew on it, scanned it, added layers of color with a Risograph, rescanned that, further edited it digitally, and printed a run to pass around.

I kind of got carried away. Wow! WTF? (see To Hold Infinity - Zine Club Edition)

Now that I have the 3-D bug on top of the zine bug, I’ve been further researching the world of pop-up books and modernist origami. I’m blown away by the awesome creations. For example, the documentary film Between the Folds (also on YouTube), this presentation by Erik Demaine and the many books of Paul Jackson and so many others!!!

As I continue to lean into single sheet creations, where will this take me?

Email ThisBlogThis!Share to TwitterShare to FacebookShare to Pinterest
Labels: Zine