Self-Portraits from the Lillstreet Class with Shawn Rowe

Here are images as I explored myself as a subject. All taken while attending the Lillstreet Portrait Photography class taught by Shawn Rowe.


Let's have a cup of coffee or tea, talk about life, make some art.

Email ThisBlogThis!Share to TwitterShare to FacebookShare to Pinterest
Labels: Photography

Portrait of the Empire State Building

Completed in 1931, the Empire State . Building was a major landmark when I was born in 1951, and continues to be so today.

This is a portrait of the grand building that I made a few weeks ago. The trees seem to offer context, they and the building are part of the urban environment.

I am reminded of my earlier post that included Edward Steichen's Flatiron building from 1904/1909. I'd forgotten that he too placed the tree limbs between the viewer and the building. His visual legacy is part of my unconscious thinking. It just seemed right to include the larger context and let the building hold its place, even in the background.

Posted by Larry Wolf at 1:50 PM No comments:

Email ThisBlogThis!Share to TwitterShare to FacebookShare to Pinterest
Labels: Photography 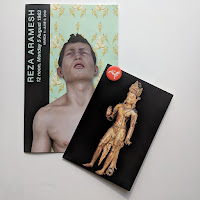 While the museum has many more traditional Asian artifacts from Buddhist statues of compassionate deities to ancient Chinese maps, this exhibit is a contemporary dive into current topics of war and torture, sculptural expression of emotion, an undercurrent of beautiful male bodies and a reference to religious ecstasy.

From the exhibit guide: "This exhibition showcases the artist’s series of sculptures depicting young men in pain, sourced from war reportage images found online as well as in newspapers; their titles refer to specific historic political events and conflicts."

In an interview, he says: "In 2010 I saw an incredible exhibition of polychrome sculptures from seventeenth-century Spain, called The Sacred Made Real: Spanish Painting and Sculpture 1600–1700 curated by Xavier Bray at the National Gallery in London. It blew my mind. I kept going back to see the exhibition over and over again. This was the starting point for this series of work. I started looking at the idea and mythology of martyrdom using the material vocabulary of seventeenth-century Spanish artists."

"I began to enter a dialogue with some of the seventeenth-century Spanish artists by creating four polychrome, hand-carved busts of unknown soldiers."

"I also made a direct reference to Andreas Schlüter’s dying warriors."

As I entered the exhibit, I was struck that the four figures were in a circle. I was expecting sculptures on pedestals, that there would be a formal, static, presentation of the art. It created an immediacy, a sense that these were people, very much a live, almost as though they were in an ecstatic dance, not static sculpture depicting death. 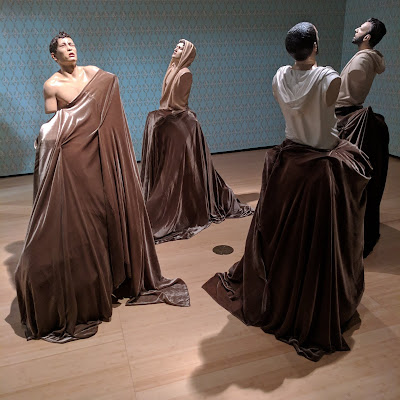 The sculptures were draped in fabric, presented the men as though wearing robes.  The folds of the fabric and the sculpted hoodies echo the monks in Sacred Made Real.

While all the sculptures incorporate particular moments, particular people, I only found this one image which feels directly related.


The exhibit room is wallpapered, adding to the sense that was are in a personal living space, a living room or ballroom. 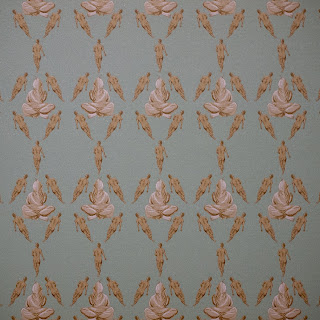 Aramesh: "The wallpaper is designed in dialogue with a typical eighteenth-century French style. The base color is called eau de Nil (water of the Nile), which was considered a luxurious color that was often used in palaces and stately homes during the nineteenth century. I decided to take a common pattern of the period wallpaper and juxtapose it with some of the violent images of recent wars." 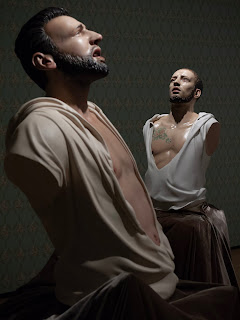 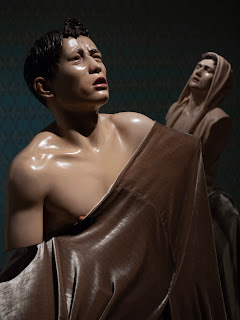 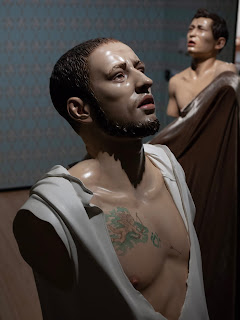 Posted by Larry Wolf at 1:28 PM No comments:

Email ThisBlogThis!Share to TwitterShare to FacebookShare to Pinterest
Labels: Exhibit

Glow of My Laptop

This is a start. There will be more. For now, here's one from the first session, playing with a self-portrait before sunrise. 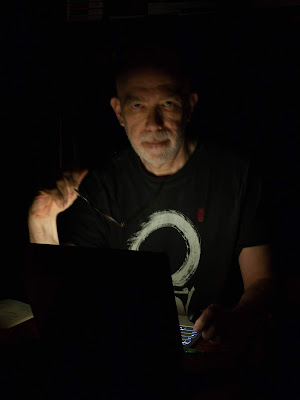 Here's a full exposure shot of the t-shirt