Wrightwood 659 - The Allure of Matter

I spent a couple of hours at Wrightwood 659, a gem of a museum hidden behind the facade of an old apartment building. Their current exhibit is work from China. The exhibit at Wrightwood 659 is paired with one at the Smart Museum of Art.

Since the 1980s, artists working in China have experimented with various materials, transforming seemingly everyday objects into large-scale artworks. [from the exhibit website]

Posted by Larry Wolf at 4:28 PM No comments:

Email ThisBlogThis!Share to TwitterShare to FacebookShare to Pinterest
Labels: Exhibit

The PROMIS Lab was a hotbed of clinical informatics innovation in the 1970s and into the early 1980s. Here two physicians are in conversation.

The Journey Forward Begins with the Journey to Now

I'm taking a dive into my personal archive, reacquainting myself with who I've been and my journey to who I am today. The specific nudge came from Shawn Rowe and the Guided Project class he's teaching at Lillstreet.

I began by organizing the photographic slides I've created. They have been in boxes of various sorts as well as non-archival vinyl sheets. Any semblance of order has been scrambled over the years when I would make slide shows for my friends, then dump the tray of slides into random boxes and start again. I'm about halfway through sorting all of that into archival boxes. 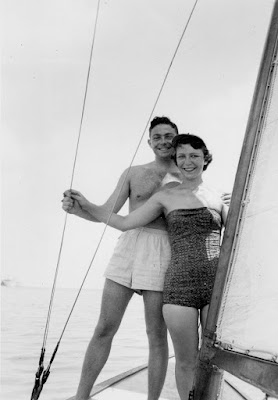 I'm using Julia Cameron's book It's Never Too Late to Begin Again as a framework. She has a twelve-week plan that includes reflecting on life, using one week for every one-twelfth of a life, for me, that's groups of five to six years. The goal is to create a memoir for that time period.

Beginning a bit before the beginning, here is a photo of my parents on their honeymoon.

Rough age groups. There are only eleven of these. As I work through the years, I may shift them around a bit.