An essay by Ursula K LeGuin, - an afterword in We by Yevgeny Zamyatin 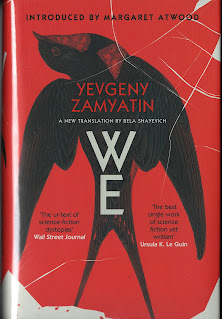 The Stalin in the Soul - Sketch for a Science Fiction Novel

Ursula K. Le Guin, 1973, 1975
in The Future Now
Robert Hoskins, editor
Published by Fawcett/Random House, 1977
included in The Language of the Night
Essays on Fantasy and Science Fiction
By Ursula K. Le Guin · 1979
afterward in We by Yevgeny Zamyatin
reprinted 2021

Some Quotes from the Essay

Shock them, jolt them, titillate them, make them writhe and squeal - but do not make them think.

We do not believe in the reality of art. ... in the power of art to change the minds of men.

Despite all disclaimers, it is only when science asks why, instead of simply describing how, that it becomes more than technology. When it asks why, it discovers Relativity. When it only shows how, it invents the atomic bomb, and then puts its hands over its eyes and says, My God. what have i done?

When art shows only how and what, it is trivial entertainment, whether optimistic or despairing. When it asks why, it rises from mere emotional response to real statement, and to intelligent ethical choice. It becomes, not a passive reflection, but an act.

And that is when all the censors, of the governments and of the marketplace, become afraid of it.

Let Yevgeny Zamyatin, who understood something about truth, have the last word

A literature that is alive does not live by yesterday's clock, nor by today''s, but by tomorrows. It is a sailor sent aloft: from the masthead he can see foundering ships, icebergs, and maelstroms still invisible from the deck.

What is truly alive stops before nothing and ceaselessly seeks answers to absurd, childish questions. Let the answers be wrong, let the philosophy be mistaken -- errors more valuable than truths, truth is of the machine, error is alive; truth reassures, error disturbs. And if answers be impossible of attainment, all the better! Dealing with answered questions is the privilege of brains constructed like a cow's stomach, which, as we know, is built to digest cud.

If there is anything fixed in nature, if there were truths, all this would, of course, be wrong. But fortunately, all truths are erroneous. This is the very essence of the dialectical process: today's truths become errors tomorrow; there is no final number.