When I was nineteen, I won a literary prize given out by a college newspaper. ... so I wrote about a woman in her fifties who'd always had an inferiority complex about her education, who went on to get two bachelor's degrees at an online university and threw everything she had into her son's education; it was the only story I could write at that time, and the judges declared it the winner ... Umma heard the news ... got a copy of the paper, and read the story. Then she cried for four days straight. I could hear her sobs and lamentations through her bedroom door. "I can't believe I hurt you so much, I can't believe I exploited you like that!" "Umma, for God's sake, fiction is just fiction! It's all made up!" She refused to listen to me and from then on avoided anything I wrote ...

Umma looked as hard and beautiful as ever as she gazed into the sunset. As I watched her, it suddenly occurred to me that she may indeed have read every one of my published stories and writings. Not that this would've changed anything, really. She spoke in a sentimental voice.

- I used to feel that I'd been given the whole world when I held you.

Umma was now lying on the grass and staring up at the sky. She looked incredibly calm. At peace. I wondered if that ninety-nine-pound, fifty-eight-year-old woman staring at the fading firmament was feeling the same way I was feeling. That my life could not be summed up like the neat columns of numbers on a chart, that it could swerve in an unpredictable direction at any time. That the person I thought I knew best just because we had blood ties could actually be the most mysterious and unknown. That there were times in life when you just have to stop holding on. And that was why the only thing I could do now was to cease all thinking, to simply watch her as she smiled and attached meanings to silly things like the rising and setting of the sun. All I could do was await her death.

Sang Young Park, Love in the Big City, A Bite of Rockfish, Taste the Universe

The traffic began getting bad at Hannam-dong. I hopped out in front of the CJ Building and ran the rest of the way to G—.

I screamed when I first read those two sentences, in pure delight of recognition. What club-going gay in Seoul hasn’t done this: ridden a taxi into Itaewon, abandoned the taxi at this exact bottleneck in Hannam-dong, and ran the rest of the way to G—? As a Korean gay man in Seoul just a little bit older than Sang Young himself, I can even tell you the letters obscured by the em-dash in G—. ...

Of all the sentences in this book, some were relatively easy to translate, while many presented a plethora of conundrums and points of discussion that could easily fill the limit I’ve been given for this note. But the sentences I most wanted to discuss were these two. They took hardly any time to translate, but I spent a few minutes fretting that no one would know how thrilling it was to see them in a novel, this wink to All the Gays of Seoul.

Because until I read these sentences—nay, until I read Sang Young Park—I had no idea how much I’d subconsciously craved for someone to put my experience of my world in my time into print, to give my brief life here and now the sacred consecration of literature.

I Dedicated My Book to My Mother, But I Can’t Tell Her I Wrote It

I want to tell her: I wrote about our lives, Mom, and yes, there are some things in this book you might not like, but there is also so much tenderness, like how after you kicked down my door that day and I thought you would kill me for being gay, you climbed into my bed and told me you loved me, te quiero, perdóname. 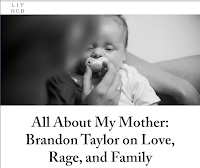 The first thing that my father said to me when my mother died was that she had loved me. And at the time, I thought, what a ridiculous thing to say. Not because her love was evident to me—it was not and is not, really, an evident thing—but because he thought it meant so much to me and I felt at the time that it didn’t. I scoffed and made a joke and he said it again, She loved you. You know that, right? She loved you.

Her name is Mary Jean Speigner. She died young. She worked jobs so hard that the heels of her feet were cracked and gray. She dipped Skoal and spat it into Natural Light cans. She watched every soap opera religiously. Her favorite fish was whitey. She didn’t eat salt. She didn’t eat sugar. She fried her chicken black. She checked her blood sugar in the morning and in the afternoon, her blood purple-red as she pressed it flat on the test slips. She had a tremor in her left hand. She had a pert nose and hooded, dark eyes. Her favorite color was green. Her favorite show was 90210. She loved Hugh Grant. She loved to laugh. Her favorite music was blues. She had a terrible singing voice but loved to sing. A man raped her when she was young, and nobody said anything about it. Nobody did anything about it. She saw him every day. She drank every day. Sometimes, she didn’t eat because her stomach hurt so bad that she wanted to cry. But she didn’t cry. She never cried. Just once. When her sister called her an ugly liar when they were full-grown. She went home and cried on the bed for hours. She hated bugs. Her voice was raspy. She hated to be touched. She hated to be spoken to like she was stupid. She hated secrets. She never told the truth. She danced all the time. She slept late. She stayed up late. She had trouble sleeping. She was afraid to hear about the dreams of other people; it was like a screeching sound to her, to hear about what other people had dreamed. She could make a joke out of anything. She loved to tell stories. She believed in magic. Nobody stood up for her so she had to stand up for herself, and after a while, she got tired of standing.

I wish I had gotten to know her better.

I think we would have been great friends.

I wish I had tried harder. Sooner.

But I have to stop for now.

Email ThisBlogThis!Share to TwitterShare to FacebookShare to Pinterest
Labels: Family