Freeze … my default reaction … don’t breathe… hold it in my gut.. be still, be invisible, don’t attract attention. The storm will blow over. The monster will get bored and move on. The sun and the moon will still rise and set even when I can’t see them.

Quiet tears … most often on reading when people stretch beyond their abilities to protect others. I was proud of myself that I sobbed and had to catch my breath while reading a eulogy at my father’s grave side.

Early messages to not show emotion, to not be a cry baby, to not be so sensitive, to stop having my feelings hurt. Grow up. Get over it. Be a man.

Learning, training, to be present. Decades of meditation, coach training, meditation instructor training…  to be present for others pain, for my own pain. Learning the curse of spiritual bypass, of “everything is impermanent” and yet, some things are deeply moving and it’s necessary to honor that depth and profundity, not imagine it away. Being present without manipulation, without a desired outcome, without tilting the scales. Allowing the decades, generations, of shielding to gently, slowly, gradually fall away… or not.

My father’s parents' deaths.. his mother died when he was away at college, his father died when he was away in the Navy with his wife and infant children…  his last discussion with his father was a fight over presidential politics … the betrayal of his father’s business partner uncles who didn’t include my father or his brother in the business going forward nor give them their fair share. My mother’s own loss when my father’s/her husband’s father died. He was the only adult male who supported her unconditionally. All of that loss was pushed aside, pushed down, in service to functioning in the world. Not a week of shiva. Not a year of morning minyan. I was two when this grandfather died. The shadow around that time still lingers.

There is a bigger cultural story in the disappearance of ancestral/extended family during the genocide of WW2 The pogroms of a generation earlier had sent my grandparents and their parents, aunts and uncles, siblings and cousins, in search of safety in Canada and the US. They rarely spoke of being refugees, and never of the gaping holes left in the web of a family, of a community, of a race (yes, being Jewish was then, and is sometimes now, a race, a “people'' with a language and for millennia only the folklore of a country, and now that country is an oppressive police state). Antisemitism continued in their new countries, in my country, though generally more subtly  than a mob riot or a military attack. Insidiously internalized, there was an overriding desire for safety - through assimilation for one branch of the family or living in the past of orthodoxy for another branch - neither approach has ever provided real safety. More than a shadow, a vast dark never-ending night.

Of course these attacks are not limited to any one group or race or time or place. Many sacred spaces have been invaded - synagogues, churches, mosques have all been scenes of terrorizing attack, descecration and murder. Trauma both strengthens and destroys family and community.

Lived Community - A Gay Male Out Since Shortly After Stonewall

Going to a smoky gay bar was a refuge from pervasive inner and outer homophobia. It was also scary, stepping into the lion’s den, confronting my own sexual desires, fearing the stereotypes, finding tricks and friends and lovers… making a life.

Seeking to counter the mainstream narrative with my own life, being as visible as I felt was safe. Taking control of the cultural message, with my immediate family, as part of the speaker bureau for LGBT student groups, as co-chair of Out in the Mountains (the Vermont LGBT monthly newsletter/magazine), interviewed by newspapers, testifying at state legislative hearings, attending local/regional Pride events and the Marches on Washington.

And then, during and through that, the overwhelming tragedy of AIDS. The panic of an emerging pandemic, the vitriolic attacks by the Catholic church (and others), the turning away of the government (local, state, federal), … and the emerging community of activists fighting for our lives … Gay Men’s Health Crisis, ACT-UP, Gran Fury, Queer Nation … those groups defined an edge while others of us were working from the middle. I hunkered down in a dysfunctional, largely monogamous and always safer-sex relationship.

It wasn’t all bleak.. there were doctors, nurses, hospitals, friends, family and neighbors who stepped through their fears to help… early confrontations led to lasting friendships… like that of Larry Kramer and Anthony Fauci… and eventually drugs, very very expensive drugs, that hold the virus in check (another soapbox for another time).

During that time, it was the plays - Larry Kramer’s Normal Heart, David Drake’s The Night Larry Kramer Kissed Me, Paul Rudnick’s Jeffrey, Tony Kushner’s blockbuster Angels in America that really spoke to me, in the communal space of a theater, in reading them out loud to myself. A place to cry in public without having to explain or interact or accept unwanted consolation. A way to cry in the sanctuary of my home. A catharsis.

There is a long tradition of communities creating quilts. The Names Project/AIDS Quil was a way to grieve together. I never made panels for friends who died, attended few funerals, keeping much of the details in the abstract, keeping much of the dying at a distance - while also visibly advocating for safer sex, for public health, for broader understanding, wearing a red rhinestone ribbon (we are FABULOUS).

The unveiling of the AIDS Quilt on the national mall in 1987 was heart wrenching and grounding - a sea of weeping people as we walked among the panels, a vast field of loss and love and remembering. It was near the Vietnam Memorial with its polished black granite wall of names, descending into the earth, another place of communal mourning, another naming of the dead.

Moments of “Enough!” Stonewall was one moment of “we’re not going to take this any more”.  Matthew Shepard’s brutal beating death was another “we’re too good at this public mourning and protest, this has to be a turning point for real change” (it would be another 20 years before the Federal Hate Crimes Prevention Act became law). And then mass murder at Pulse (lost in a wave of mass killings, in magazine offices in Paris, in synagogues in the US, in churches, in mosques, in schools, at concerts, …).

The music.. of the bar, the disco, the concert hall, to be danced to, sung in the shower, … the music of gay and lesbian bands, of ballard singers creating a new oral history, the Men’s and Women’s (and sometimes broadly LGBTQ) Choruses in cities large and small. Celebrating all of life.

In the past year or two, I have worked on a few art projects that address my many heritages, many losses, seeking deeper understanding, personal healing, and keeping a history alive.

Pink Triangle Portraits - drawings of the men in the signature photograph of homosexuals lined up in a concentration camp.. to see them as individuals.. to imagine their life before.. and how they became a symbol for future generations to rally around.
https://www.larrywolf51.com/p/pink-triangle-portraits.html
Rough Raw Reclaimed - a zine of personal archival photographs (and a couple from public archives) with accompanying text to tell my story of a personal and cultural journey.
https://www.larrywolf51.com/p/rough-raw-reclaimed.html
To Hold Infinity - the grief of a friend at the sudden death of his beloved wife led to a folded paper altar.
https://www.larrywolf51.com/p/to-hold-infinity.html
Picasso’s Guernica - not my art making, but Picasso’s. The progression of his response to the mass killings at Guernica is chronicled in the series of dated drawings and photographs of the work in progress, offering insights into the artistic process, one human's response to the actions of other humans. The effort and evolution of finding form to convey ideas and emotions.
https://www.larrywolf51.com/2022/04/drawing-drawing-drawing-picassos.html

Queering Death - An Anthology of Questions

These musings were written for a reading group led by Kean O'Brien, Exploring Grief, Death and Trauma. They came from considering this anthology of questions: 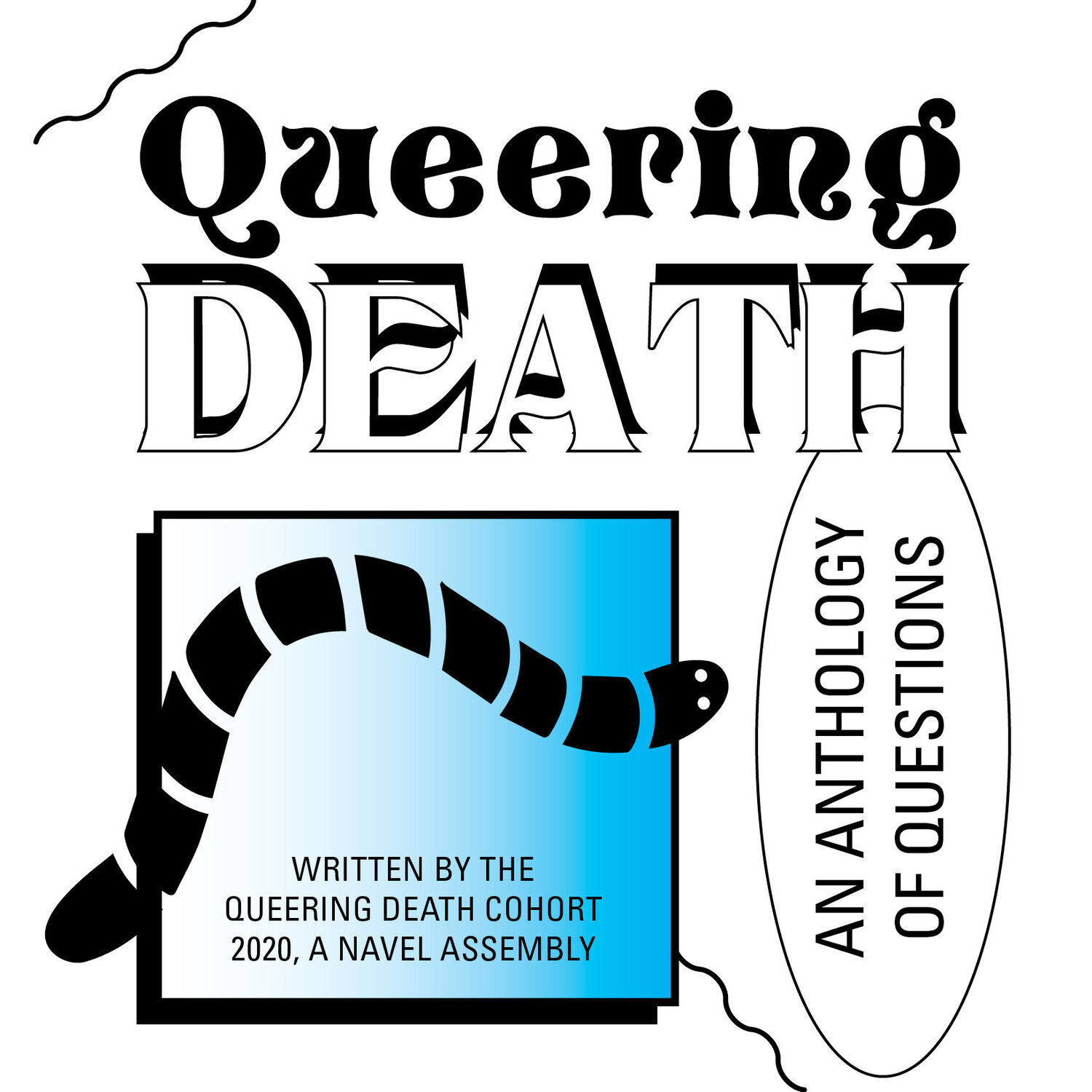 QUEERING DEATH: An Anthology of Questions is a workbook featuring questions compiled from the first Queering Death cohort. Use this anthology of questions as prompts for journaling, in conversations with loved ones, as an edgy ice-breaker, as demands to elected officials, in affinity groups, or however you see fit.

Written by the Queering Death Cohort 2020
Posted by Larry Wolf at 7:34 AM